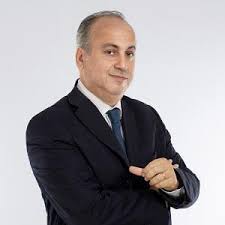 Born in Rome in 1965, graduated in Economics and Business, he began his career in R.T.I (Finivest group) as a management control officer for Canale 5, Italia Uno and Rete 4.

In 1996 he joined Rai to support Rai1‘s management, dealing with the planning and monitoring of the costs of television programs, and the analysis and evaluation of the production factors related to TV programming.

In 1999 he joined the TV Canale 1 and 2 Division, with responsibility for economic and financial analysis: he is responsible for the financial planning of the television programs produced by Rai1 and Rai2 and for the evaluation of the economic performance of the resources employed.

In 2002 he was in the Staff Directorate of the General Manager, where he became head of the economic analysis and contract verification area: he was responsible, among other things, for verifying contractual proposals and analyzing and evaluating economic and financial documents. editorial.

In 2006 he assumed authority for the Procurement and Purchasing area of ​​the Television Resources department, managing the negotiation and formalization of entertainment contracts.

In 2009 he was appointed Deputy Director and subsequently Director of the General Management Staff.