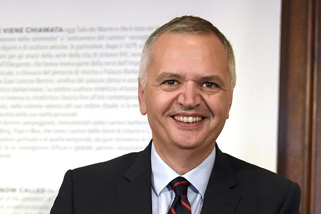 He graduated in Business and Economics and started his career in the Public Administration in 1997. In October 2000 he became executive of the Performing Arts Department (MiBAC- Ministry for Cultural Heritage and Activities) and afterwards of both the Direction General for Cinema and the Direction General for Performing Arts.
From 2009 to 2019 he served as Director General for Cinema. In particular he coordinated all the administrative, accounting and managing procedures related to the legislative reform of the Italian film industry sector and contributed to the elaboration of the tax-credit and tax-shelter law.
From August 2019 to March 2020 he was appointed Director General for contemporary creativity and urban regeneration.
Since March 2020 he is Director general cinema and audiovisual (MiBACT -Ministry for cultural heritage and activities and for tourism)